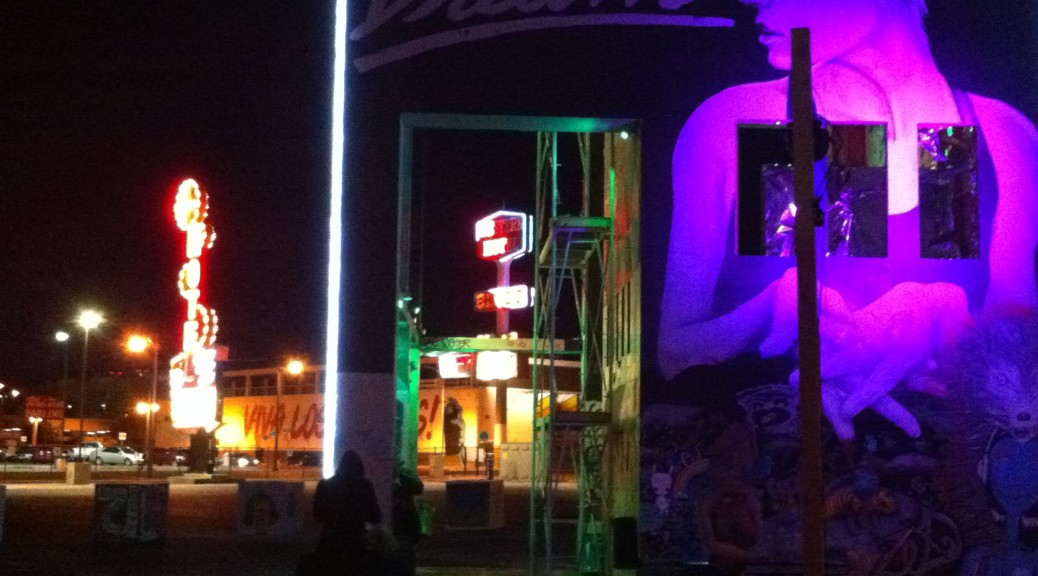 Part I: Life at the Life Cube

People are wandering the grounds of the Life Cube project. Some are talking, some are painting, some are quietly just taking it all in, or loudly touring the space by the dozen in a pedal driven portable bar. The diversity of the people involved is fascinating. Homeless people attracted by the energy and the warmth of the fire sit right next to millionaires, professional artists share paint brushes with aspiring students and young techies discuss the next Ruby on Rails project while two small dogs chase each other endlessly around the property barking and playing.

I’ve been sitting at this late night fire pit for two weeks now, trying to understand what the point is. The more I learn about the project, the less I feel like I know. I suppose whenever one stares into a fire too long near creative spaces and people, we are ultimately left questioning everything.

Ziggy is the project construction manager and has been bringing his amazing smile and generous nature, his small portable bike and his guitar to the Life Cube every day for weeks on end. Damon is just a local who happened to show up one night with a ukulele in hand, and Isamar is a local student who has also been hanging around the fire pit for a few days and is learning to play guitar (she’s playing mine tonight).

I feel like I got called here. I’m here not only to observe, but to be somehow transformed as well. Three weeks ago, I had about as much interest in this place as any other downtown, which is to say I know where it was and what it was, but wasn’t connected in any significant way.

I knew the Life Cube Project was essentially a big box they were going to burn to the ground in some airy fairy “We all grow when we burn together” hippy shit. It was labeled as a community project but, from the outside, it looked like just another playground for Zapponians like Gold Spike or Container Park. Something that locals would shy away from more likely than not.

Fortunately, from the first time I met the Life Cube’s visionary leader and creator, Scott Cohen, I was welcomed to the inside. Truth told, Scott welcomed as many as he could, as loudly and as often as he could, every chance he got. I’m not really certain he ever even realized there was any type of division in the make up of the downtown community here. As far as Scott seemed concerned, the only differences were those who were willing to paint and wanted to contribute, and those who didn’t.

In the weeks that followed, I learned to view the project as something much more than the sum of its parts. The Life Cube became a microcosm of all that is right, and wrong, with the new downtown.

If you enjoyed this site, please consider letting others know. You can write the author directly at nitewalk@nitewalk.com or you can keep up by subscribing to the RSS feed to have future articles delivered to your feed reader. Thanks for your support!

Las Vegas and other random ruminations on the brain.